Say Opa! to a Greek adventure that kicks off in Athens and explores two glittering island gems in the Aegean.

Discover the treasures of an ancient world before spending a glorious week getting lost in the labyrinthine lanes of Santorini and Mykonos. You’ll combine your love for history with laid-back island life, visiting secret coves, seaside cafés and rambling ruins built to honour gods and goddesses.

These remain as a testament to the lynchpin role ancient Greece once played in shaping western civilisation as we know it today. 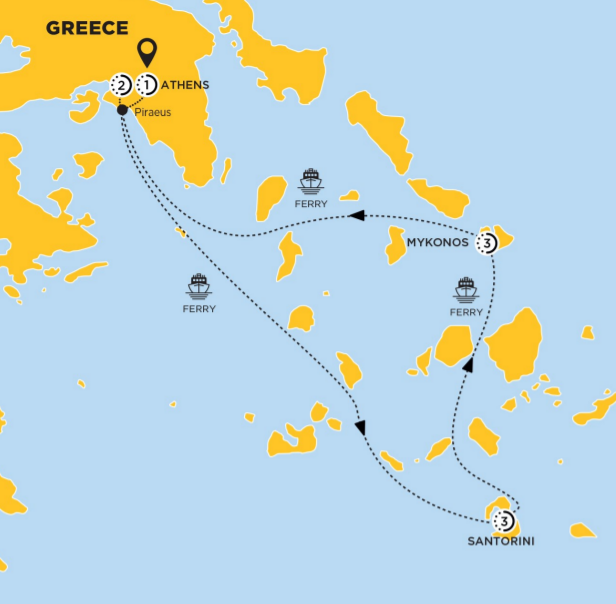 Let it sink in ­ the fact that you're standing in what was once the centre of the western world, where the likes of Socrates, Aristotle and Plato offered their wisdom and insights which have stood the test of time. Your launchpad to a Greek island adventure begins in the capital, where you'll be met on arrival and transferred to your hotel. There's plenty of time to relax on the islands, so lace up your walking shoes
and discover the city your way. Later, join your Travel Director and fellow travellers for a glimpse into what lies ahead.

The Acropolis looms large over Athens and today you'll get up close and personal with this ancient citadel. Your Local Specialist reveals its extraordinary history that spans thousands of years as you view the archaeological remains of temples, theatres and the mighty Parthenon, considered the most important building to survive from Classical Greece. You'll view the Panathinaiko Olympic Stadium, the Temple of Zeus and Hadrian's Arch, stopping in Syntagma Square to admire the curiously clad Evzone guards at the Tomb of the Unknown Soldier. The rest of the day is yours to explore Athens on your terms, but with ancient history on your mind, you may wish to embark on an Optional Experience to see the 5th­century BC Temple of Poseidon at Sounion. This evening, if the sizzle of street food hasn't already captured your attention, you may wish to join your fellow travellers for an optional traditional dinner at a favourite city taverna.

Don't resist the urge to slow it all down as you leave the busy cityscape behind and catch a high­speed ferry to Santorini. The spectacular volcanic eruption in 1646 BC had quite the magic touch on its dramatic landscape. After checking in and an orientation tour, you'll have some time on your own, followed by dinner at your hotel.

Don't waste a second of your time lazing on the sun ­soaked beaches of Santorini when you can ascend to its highest point for stunning views instead. This Optional Experience will reveal the iconic landscapes of the Cyclades you've only seen in photographs ­ the gleaming whitewashed buildings, cerulean blue domes and tumbling cerise bougainvillaea. An alternative Optional Experience could see you board a caïque fishing boat to the volcano instead, soaking in its warm thermal waters and healing mud against the backdrop of Santorini's enchanting cliff­top villages. This evening, there's no better place to bid farewell to another beautiful island day than in Oia. After an optional afternoon wine tasting paired with local meze, you'll stroll through its marble streets to our favourite sunset spot to capture the Instagram shot of the trip.

Indulge in another full day to explore Santorini your way. You could choose one of several Optional Experiences to fill the day or stroll through Fira's narrow streets shopping for last­minute souvenirs, clothing and jewellery. Incredible views of the Caldera are never far as you explore the island's ancient paths, villages and beaches on your own. Why not make the most of your final evening in Santorini, sampling the local culinary delights with uninterrupted views of the Aegean Sea? There's always time for one last ouzo.

Bound for the island playground of Mykonos. All that stands between you and the sun ­kissed shores of the Cyclades is a short high­speed ferry ride. After transferring to your hotel and a short orientation tour, Mykonos is yours for the taking so don't hold back and seek out your favourite island spots for the rest of your stay. Whitewashed houses line the narrow streets and life is rather idyllic behind the colourful wooden shutters that shield the locals from the warm Mediterranean sun. Dinner tonight is included and you'll need no excuse to stay out late, indulging in the island's renowned nightlife.

Snap your fingers and you'll be on the other side of the island. Well, almost. You could choose to spend your day exploring tiny Mykonos your way or join your fellow travellers for an optional Island Tour driving through arid landscapes to some of its most celebrated beaches. Before you dip your toes into the water, you'll visit Ano Mera village whose 16th­century monastery is dedicated to the protectress of Mykonos. Then continue to the beautiful Blue Flag beach of Kalafatis to enjoy a cruise on a traditional caïque fishing boat.

Grab your front ­row seat to the goings ­on in Mykonos's old port as you sit perched on one of the brightly painted wooden balconies characteristic of Little Venice. There's time today to wander through the shopping streets of Chora village and see the 16th­century windmills of Kato Mili that look out over the bay. For history lovers, there's no better way to spend your day than joining an optional visit to nearby Delos, the legendary birthplace of Apollo and his twin sister Artemis. On this captivating exploration of what was once the most important site in ancient Greece, you'll see many artefacts that have been collected in the ruins of this sacred site. After a day of sightseeing, you'll want to make the most of your final evening in this island playground. Seek out a taverna with beautiful views of the sunset and toast to another day in paradise with new friends.

Leaving island life behind, it's time to return to Athens for a final exhilarating encounter with the vibrant Greek capital. Transfer to your Athens hotel, then spend the evening in the narrow lanes of Plaka following your nose past its 19th­century façades to find the best souvlaki in town. A lively evening lies ahead if you've yet to have your fill of good times with good friends. Keep your toes tapping to the street music that fills the air and find a taverna with your name on it.

Your journey through Athens and the Greek islands reveals why ancient Greece was the chosen land for gods and goddesses, philosophers, poets and famous personalities. As you prepare for your return journey and long after you arrive home, you'll remember the generous spirit, postcard ­perfect scenery and legacy of the ancients that are among the many gifts that Greece has given you. Say farewell to your new friends at the end of your holiday. Find out more about your free airport transfer at costsavertour.com/free transfers.